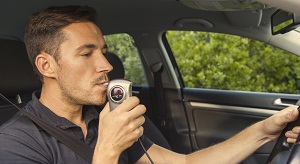 An ignition interlock device requires a driver to blow into a breath test device to prove he or she is sober. If the breath test machine registers any amount of blood alcohol content, the car will not start. After the car starts, the machine requires the driver to periodically blow into it to prove continued sobriety. If the driver fails the running breath test, the car will continue to run because of safety concerns. But either the car’s lights will flash continuously, or the car’s horn will sound. This will attract police attention and the driver will be stopped. Other safeguards built into an ignition interlock device include temperature and air gauges that are designed to prevent your friend from blowing into the machine.